then
Here’s the web site you’ve been waiting for…

Whatever the occasion or event for your personalised badges :
… with our selection of circular, heart shaped and rectangular badges in a range of sizes
we should be able to help you.
Visit our Main Site Now
Our web site enables you to buy all your personalised badges for your party on one site
and we can despatch most items
within 24 hours
(in fact, often on the same day)
At last, the solution to your party problem

It’s never been so easy!

What more could you want !

If you are viewing our your desktop and want to share the images with your friends. so that you can decide which oif the personalised badges you should order then bookmark this link to our main site. You can then view the images on either a mobile or tablet.
My Party Wear
Personalised Badges
Think of how much fun it would be to give out personalised badges at your own organised event, fair, fundraiser, campaign or even a birthday party – perhaps with a theme that could be reflected in the badge design. The possibilities are endless, needless to say.
This little account might give you some ideas.
Recently, I attended a birthday party of a 5-year-old celebrated at their own house. Upon entering, each child was given a different coloured personalised badge with different text to wear on their outfit. No one understood the purpose clearly enough at that point, but followed the rules and put on their badges. A while later, when the birthday girl came down, she was wearing a black sash filled with so many colourful personalised badges of all shapes and sizes, that you could hardly see the sash itself. Some of the ones I could read were labelled with u201cItu2019s My Birthday!u201d, u201cIu2019m finally 5u201d, u201cHappy Birthday to meu201d, u201cWhereu2019s My Gift?u201d and dozens more. They were looking absolutely adorable. Some even had pictures of her on all her previous birthdays. I completely adored the idea. It was such a unique yet fun way to bring the attention to the birthday girl. All the children would come up turn by turn to read all her badges and she, in return, was loving all that attention on her birthday. It made her feel so special and that smile of content never left her pretty little face.
When things settled down and after everyone arrived, it was game time. The hostess got up, grabbed the microphone and simply asked all the children with a blue badge to step to one side, all with a yellow badge, to another and all with a red one to another side. And it was as simple as that. Something that usually took 30 minutes to do while dealing with this age only took two short minutes thanks to the personalised badges that the hostess had had the forethought to buy. Another brilliantly, well-thought out plan I totally admired. With children divided into all three groups, it was much easier to play the games with everyone already in teams. There were no fights on whose team a child wanted or did not want to be on. And no child was left out. Alter all the team based games were over, it was time for games that required pairs. For that, the hostess had duplicated the text on two of the personalised badges the children had. So there was a partner out there for everyone. But the fun part was getting to find your own partner in the crowd. This was a game in itself and took the children 10 minutes of shouting and moving about to finally find their partners. It was seriously the cutest thing to observe.
So there we have it. I am going to make sure that I get my hands on some personalised badges for the next birthday bash I will be hosting. The amount of things you can do with them is only limited by your imagination.
Contact us t; 0845 519 1231
e: sales@cardsnbadges.co.uk

If you are looking at our products then you are probably going to be interested in these other web sites for all kinds of party wear, wedding ideas and baby shower ideas.
Just follow this link 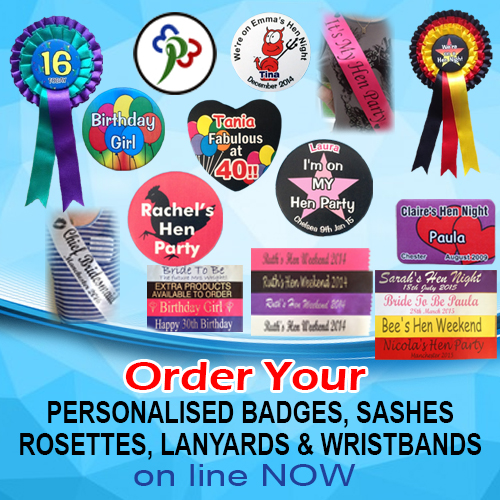 Visit our site for a great choice of badges, sashes, rosettes, lanyards and wristbands. For any information not covered on our web site, just send us an email or phone us for assistance.

We use cookies to ensure that we give you the best experience on our website.
We hope you agree, and accept the cookies.
if not please click 'read more' to learn how to control them